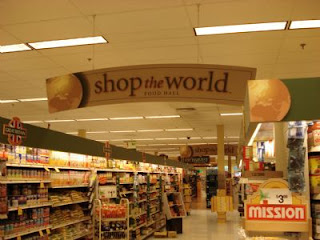 Oh yeah, and our family is a bunch of foodies. We have champagne tastes. Unfortunately, we function on a beer budget. Because of our food snobbery, I learned to embrace what I call “fillers.”

Kelly’s Definition of “Filler” – (1) must provide a full-feeling with minimum complaints from the clan (2) must be healthy (3) any thing you can eat that isn’t an expensive protein – ideally under $.75 per pound.

Looking back, I realized my mom used quite a few fillers in my childhood dinners (remember I’m from Nebraska): potatoes, noodles, minute rice, frozen mixed vegetables (gag), bread, and JELL-O. (Yep, we had jell-o at EVERY meal and sometimes it had vegetables in it. Again, gag. Sorry Mom.) And while those fillers were a great starting point (except the veggies and Jell-O thing) – I needed more options for my foodie family. So I took an adventure to…

The weird ethnic aisle is like Disneyland’s “It’s A Small World”. All cultural foods you’ve heard of before but have no idea how to make claim residency here. It’s where couscous, dried beans, and tahini hang out with tamales, dried shitake mushrooms, and par-boiled rice. And while I was intimidated when I first ventured into the weird food aisle – I was also excited because everything was so stinkin’ cheap. Then I got adventureous and wandered into the…

I found 10 different kinds of squash, jalepeno peppers, rutabagas, spinach, sweet potatoes, cabbage, cilantro, Italian parsley, and leeks. (Who knew there was more than carrots and onions?) Even better – when these weird vegetables are in season – they are also stinkin’ cheap. So I found some recipes, grabbed some “weird” foods, and gave it a whirl.

The outcome? Most things in the ethnic aisle taste AMAZING compared to their canned or instant counterpart. (Don’t believe me? Make black beans from dried beans and compare them to the canned variety.) The other thing – weird vegetables made great “fillers” for things like soup, side-dishes, or pasta noodles (spaghetti squash).

I’ll admit, there was trial, ERROR (bok choy), and success (cabbage soup). But since the quality was so much better and the fiber so much higher than minute rice or a Knorr’s side dish – my family enjoyed the food and felt more-full off less of the expensive protein.

Since I was having some success, I decided to press-my-luck and talk to DH about having one meatless meal a week (remember, he loves cow). He relunctantly agreed and we gave it a shot. Several months later, we are still carrying on the tradition with minimum complaints.

By incorporating the cheap and filling “fillers” from the weird ethnic and vegetable aisles with our expensive proteins and going meatless one day a week, we were able to have a great variety of foods and lower our grocery bill even farther.

But I still had some work to do….

What about you? Have you entered the weird ethnic and vegetable aisle? Have you embraced your inner-ethnic-self? What kind of “fillers” do you like to buy? Any recipes you’d like to share. Leave a comment – we’d love to hear from you.

Here is a partial list of “fillers” that I use on a regular basis.

PS: Really want to walk on the wild side – go to an ethnic market. They’ll have stuff you haven’t even heard of before (or have any idea how to make)- and it will be even cheaper than the grocery store.