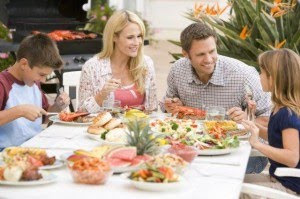 My friend Mandy and I were watching our boys particpate in the Pinewood Derby (and I mean our sons, not our husbands..LOL) and talking about couponing and saving money. She had just ordered The Coupon Mom’s Guide To Cutting Your Grocery Bills in Half and $5 Dinners and was lamenting “that she needed to figure out how to feed her hungry brood (DH and (2) DS) for less money because they were beginning to eat her out of house and home.”

After I got back home, I realized my journey for reducing our grocery budget started with couponing – but it has been other “in-the-trench-tactics” that allowed us to really drive down our budget to $300 or less per month.

So over the next four Saturdays – I’ll share some “in-the-trench-tactics” that have worked in our home. (And if you have some you would like to share – I’d LOVE to hear them too.) Hopefully, we’ll all learn a few things from each other and reduce our grocery costs and increase our financial margin a little more.

Some of those most frequent cooking complaints we hear from MOMs…”My family won’t eat leftovers.” or “My husband requires MEAT every night.” or “My child is picky and will only eat Macaroni & Cheese.” Really? Wow! Holy Cow – I have a long lost relative, because my family is the exact same way!

Yep. I’ll admit it – we don’t “do” leftovers. My husband loves things from a cow. And my son’s favorite meal is a peanut butter and honey sandwich. And one more – we don’t like very many casseroles. The good news – “knowing” that. The bad news – learning to “own” that.

Come with me as I flashback to a pretty recent meal…

Kelly would make a BIG 9×13 pan of Chicken Casserole.

First Night: the clan would eat with smiles and compliments.

Second Night: kiddos would refuse to eat it and DH would push it around claiming he had a big lunch and then resort to eating a bag of Doritos after dinner.

Third Night: FULL Revolt. With DS and DH eating peanut butter and honey, DD eating chicken nuggets, and me eating another serving of casserole – with contempt in my heart and fire coming from eyes. Then I’d throw away about a third of the casserole and wonder how much money did I really save by making this.

And when I mention “Chicken Casserole” again a month later everyone in the house starts making gagging noises and DH says “maybe we shouldn’t have that one again for a few months.”

So instead of hitting my head against the wall AGAIN and having dinner time looking like a battle from World War III – I’ve learned to “own” our family’s style and make some changes.

When I make the few casseroles our family will eat – I make two 8×8 pans. One is for dinner and the other is frozen for later. This way there isn’t as much waste and I’ve got another item in the freezer to pull out if I’m having a rushed week. Added benefit – no one is making gagging sounds when I pull the casserole from the oven. I also do this for soups, meats, sauces, etc.

Another example – my kiddos love spaghetti and tacos. They’ll clean their plates (without a thousand reminders) and my DH and I have a nice dining experience. Since I know those meals will be a hit – I schedule them a couple times a month or even weekly (depending what I have in the stockpile.) I’ll cook up several pounds of hamburger at once – freeze them by serving size – and pull them out when I need them.

Finally, because my husband loves all things cow (or chicken or pig) I make sure we have a standard rotation of meat/potato/veggies/dinner roll in the meal plan. It might not be every night – but I try to do it at least once a week in the winter and two/three times in the summer. He’s happy (cause we all know one of the ways to a man’s heart is through his stomach) and he’s willing to put up with Lentil Soup once in awhile.

Once you learn to “own” your family’s eating preferences, you can start to make a plan that means less waste, happier campers, more variety and believe it or not – greater savings.

Next week: Embracing the “fillers”

PS: Don’t you love the “family eating together” beauty shot. I bet Ken and Barbie didn’t have to say “Please sit in your chair or don’t wipe your hands on your shirt” once.