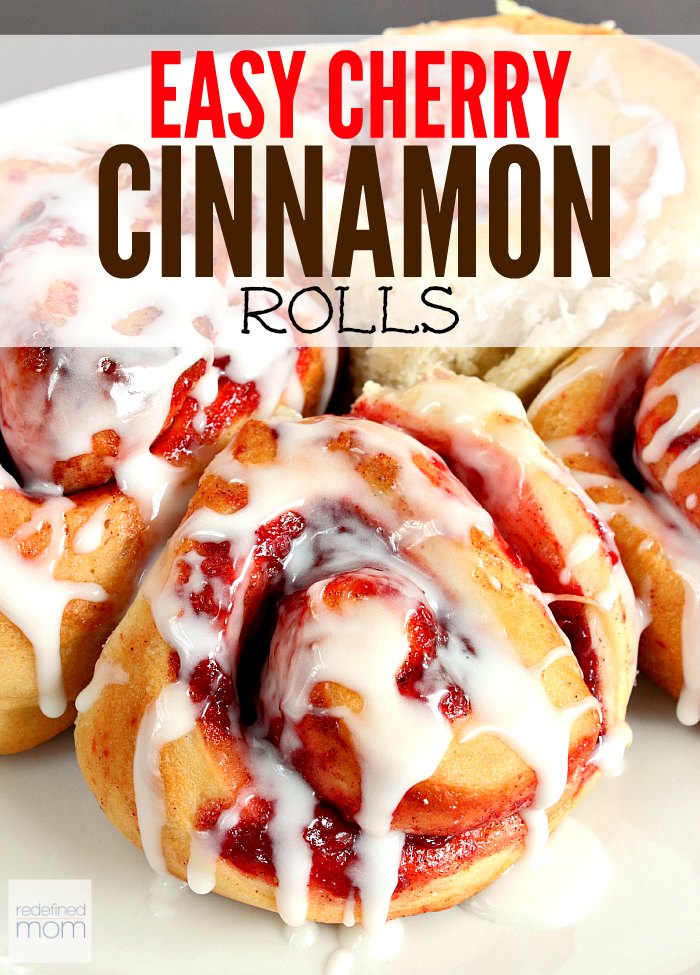 My love can be bought.

It can be bought with this homemade easy cherry cinnamon rolls recipe.

I swear to you that this roll is just like a cherry pie decided to get married to a cinnamon roll and they had children. It’s equal part sweet, savory, and tart and all sorts of deliciousness.

Don’t let the fact that they are homemade scare you…they are quick to make and easy to assemble. Just remember to make your “loaf” around the same size as your 9 x 13 pan, pinch the ends to make sure none of the “goo” falls out, and start in the middle when cutting.

Plus, they will be gone so soon after coming out of the oven, that no one will know if one roll is “bigger” than another. 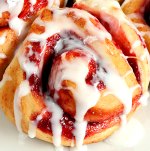 Imagine a cherry pie and cinnamon rolls got married and had a baby? It would be the deliciousness of this homemade easy cherry cinnamon rolls recipe.

1. In a small bowl combine the warm water, sugar and yeast. Set aside.

2. In a small sauce pan over medium heat, warm the 3/4 cup of milk until it is steaming but not simmering.

3. Reduce the heat to medium low, add the butter and stir until melted. Remove from heat and let cool to lukewarm.

4. In a mixing bowl combine 2 1/2 cups of flour and salt. Slowly mix in the milk mixture, yeast mixture, then the egg. Slowly add additional flour until a dough forms and pulls away from the sides of the bowl.

5. Place on a lightly floured surface and knead until the dough is smooth. Place back in the mixing bowl and cover. Set in a warm area and let rise 20 minutes. (I usually put in the oven with the light on.) Then remove from oven.

With this being said, you can substitute step 4 – 5 by mixing the dough in your bread machine on the “dough” cycle according to your manufacturer directions.

6. Preheat the oven to 375˚ (Remember to remove the resting dough.)

7. Roll the dough out on a floured surface into about a 15×10 inch rectangle. Sprinkle the rectangle with the cinnamon. Spread the pie filling over the dough leaving a 1 inch gap along one of the long edges.

8. Roll the dough so you end up with a 15 inch roll. Pinch the seam to seal. You may need to remove some of the filling as you roll so the dough can be sealed.

9. Cut the roll with a sharp knife into 12 rolls. (I start by cutting it in half. Cut the halves in half, giving you 4 rolls. Cut those in thirds. Giving you 12 rolls.)

11. In small bowl mix together the powder sugar and 4 teaspoons of milk. Drizzle over the rolls and serve warm. LOVE this recipe? Make sure to check out all of our tried and true recipes in the Redefined Mom Recipe Index.